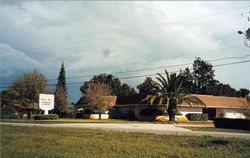 His grandson, Samuel after graduating from Talladega College in 1960, because of the declining health of his grandfather, decided to go to Mortuary School in New York and returned home in 1961 to work with his grandfather. It was Samuel who saw fit to build a new modern facility, which was completed in 1967.  Five months after moving into the new facilities Albert died in March of 1968. In 1970 his daughter Alma died, and his wife Julia died in 1988.

In 1990 Samuel completed a long dream by tearing down the building in Gifford and replaced it with a new modern facility. This was a promise that he had make to the community years back, to give them a First Class Funeral Home.

In the community he has worked hard to be a pillow of strength for many in various capabilities.

He has served as an elected member of the local school board for thirty three years, Active in the fraternal circle having received his 33rd degree, Life member of Omega Psi Phi Fraternity, Trustee and Financial Chairman at the St. Paul AME Church and a member of several others local committees, including the City of Fort Pierce Historic Preservation Board.